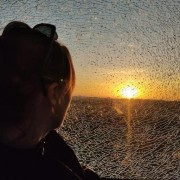 Soapkills is the band resulting from the collaboration, from 1997, of two figures of the Lebanese music scene : musicians Yasmine Hamdan and Zeid Hamdan, both born in Beirut, unrelated despite their common name.

Mixing classical Arabic music and electronic music for a unique and often hypnotic result, Soapkills then initiated a new musical wave in the Arab world, the echoes of which are still important today.

LEBANON, THE 90’s : EVERYTHING IS TO BE CREATED

In 1997, Yasmine Hamdan and Zeid Hamdan create Soapkills. The choice of the name of the band, in arabic الصابون يقتل, « as-saboon yaqtol », fits into the very specific context following the Lebanese civil war, which took place between 1975 and 1990.

In the following decade, the country, and in particular its capital Beirut, are marked by massive, rapid and immaculate reconstructions, erasing the material damage but not the psychological one. The band is thus imbued with this heavy atmosphere of « soap cleaning » which kills the memory of places and civilians.

The bruised Lebanon of this time is also deprived of musical structures : Soapkills was created when there was no concert venue, festival or big label yet. In a way, the band benefits from this situation where everything has to be invented, and wants to offer something alternative, new, from a mixture of influences, of musical experiments and shared feelings.

Zeid Hamdan and Yasmine Hamdan thus produce three albums on independent labels, and encounter a huge success which quickly exceeds the borders of Lebanon ; they perform concerts in the Arab capitals, but also in Paris or Berlin. However, the two artists cease their collaboration in 2005, each continuing their musical journey.

From a cultural and musical point of view, Yasmine and Zeid’s references are very diverse, each having lived in several countries on different continents. Advocating their ambivalence, the duo thus mixes oriental and western styles, and combines several atmospheres within their songs.

However, the originality and underground pioneer status of Soapkills results from the prominence given to electronic music in the tracks. With its Roland MC-303 Groovebox, device used among other things as a rythm machine, Zeid Hamdan is indeed part of the trip-hop movement of the time.

Trip-hop is a musical genre that emerges during the 1990’s in England, in Bristol in particular ; Massive Attack or Portishead are both emblematic bands of this style and of this time.

The so called “trip-hop” style is very important here in Beirut. After all this time of civil war and negativity, it is important to have something to trip out to… cause it gives you the chance to escape the reality — the every day situation.

To these rythmics bases is added the voice of Yasmine Hamdan, often shaped by effects, and sometimes seeming distant ; from the songs thus emerge a melancholy atmosphere, conducive to introspection. The music is sometimes languid, sometimes cold, but it always takes its time and leads the mind into a gentle trance.

Symbol of the artistic and melancholy impetus of the post-civil war generation, Soapkills is one of the first independant, electronic music bands to emerge in the Arab world, paving the way to many artists ; their musical importance and fame have only increased since their separation in 2005, in the Arab world and far beyond.

Yasmine Hamdan now embodies a reference in the alternative musical sphere, claiming its composite and unique culture. After another duo project called Y.A.S, she now lives mainly in Paris and has a successful solo career, also as an actress ; she notably appeared in 2013 in Jim Jarmush’s movie « Only lovers left alive ».

Zeid Hamdan resides in Lebanon, where he has become an icon of the country’s underground scene ; he strives to find new talents, and to encourage the development of the musical industry and the protection of artists.

To go further in the genre of Arabic trip-hop :